Finally got around to getting page 20 done (and colored)! Continuing off the previous page when Hopp and Widget had just discovered the entrance to some kind of weird tunnel through an opening in a giant tree. What will they find as they descend down into the darkness? 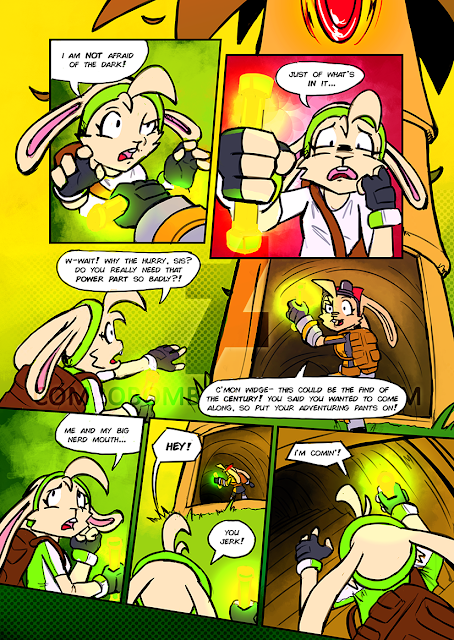 Trying my best to get back on track with getting pages finished, or at least sketched out well enough. This is the second page I'm considering completely done, since I do eventually want the whole book in color. But I'll have to just see how it goes as I get close to the end of actually completing the entire thing.
Posted by combobomb - 8/21/2019 08:27:00 PM No comments:
Email ThisBlogThis!Share to TwitterShare to FacebookShare to Pinterest
Tags: artwork, comic, hopp, original

Some videos we recorded of our game jam game. Check em out on Youtube:

So, some things I learned after we finished up the last submission on sunday night:
Posted by combobomb - 8/03/2019 06:16:00 PM No comments:
Email ThisBlogThis!Share to TwitterShare to FacebookShare to Pinterest
Tags: game design, game jam, original, unity

Got back to posting this a week late! Here's all the art stuff I did for our game jam last weekend. We chose to go with an Area 51 theme (yeah, memes, haha), so I tried creating kind of a retro, psx-era style with the graphics.

We ended up calling it "Artifact 51" and turned it into a badass VR shoot-em-up! Our two programmers killed it with the gameplay scripting. The whole idea is pretty straightforward, but actually playing it on the Oculus Quest is a lot of oldschool, arcade style fun.

We are still working on getting a gameplay video finished, and will publish the game on our itch.io page sometime this weekend for all to play in VR!
Posted by combobomb - 8/02/2019 09:58:00 PM No comments:
Email ThisBlogThis!Share to TwitterShare to FacebookShare to Pinterest
Tags: 3d, animation, artwork, game design, game jam, original, rigging, sculpting, unity, zbrush
Newer Posts Older Posts Home
Subscribe to: Posts (Atom)